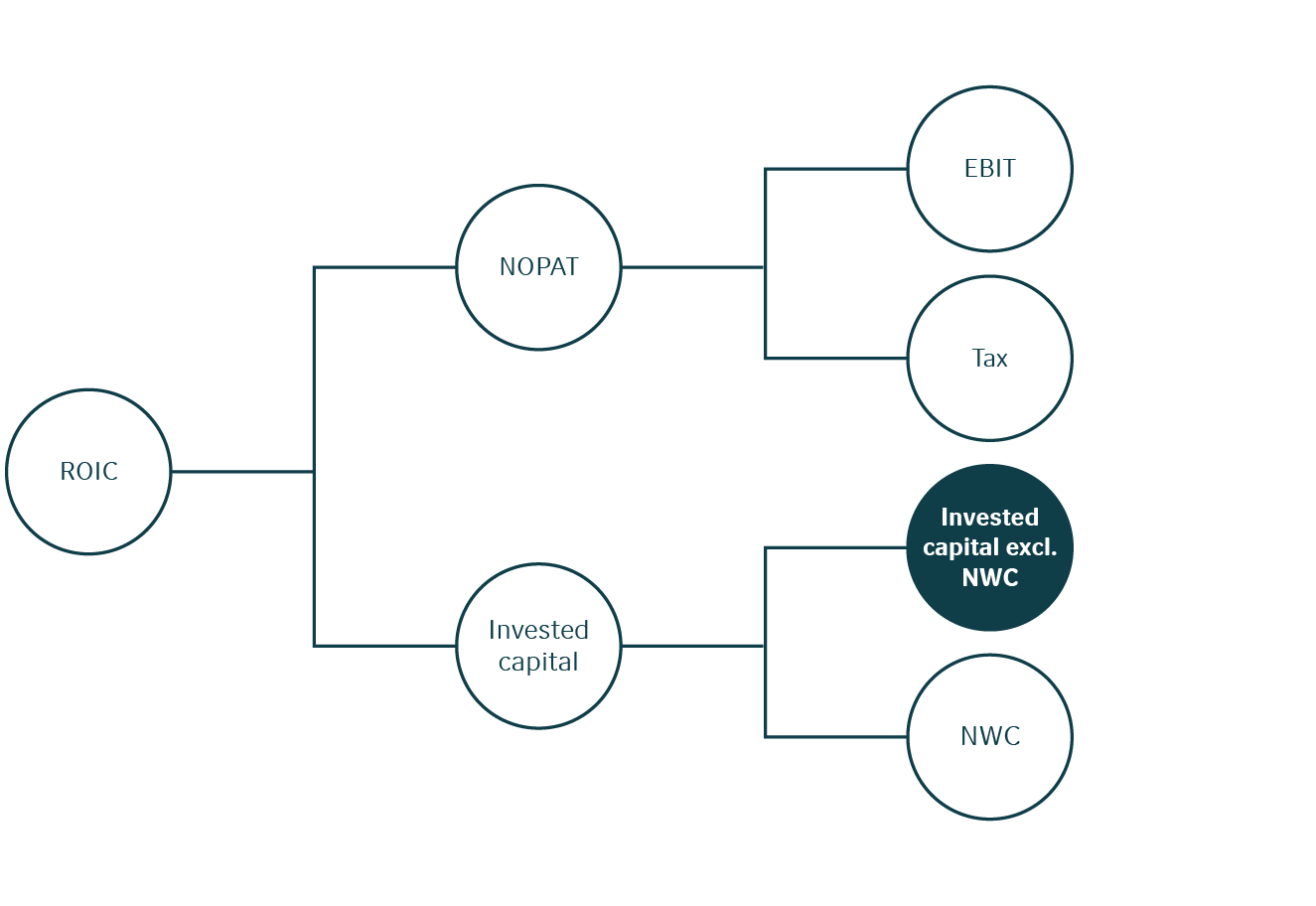 In 2018, impairment losses of DKK 59 million on two specific assets were recognized and included in Cost of goods sold and Research and development costs at DKK 46 million and DKK 13 million respectively.

A WACC of 7% was used to calculate the discounted cash flows.

The market value of Novozymes is significantly higher than its equity, thus no further key assumptions are used in determining whether impairment of goodwill exists for Novozymes’ main activities (2017: no impairment).

The recoverable amount of the Biopharma CGU has been determined based on a value-in-use calculation. The expected future cash flows are based on a forecasting period of five years, reflecting the term of the royalty agreements. The key assumptions used in testing for impairment are based on Management’s expectations of future royalty payments, which are partly based on experience, as well as input from external experts. A WACC of 11% (2017: 10%) has been used to calculate the discounted cash flows for the Biopharma CGU.

As the value in use for the Biopharma CGU is greater than its carrying amount, no impairment has been identified (2017: no impairment).

Recognition of amortization and impairment losses by function 2018 (2017)

In 2017, an impairment loss of DKK 27 million on abandoned patents was recognized and included in Cost of goods sold and Research and development costs at DKK 15 million and DKK 12 million respectively.

Management assesses the risk of impairment of the Group’s intangible assets. This requires judgment in relation to the identification of cash-generating units (CGUs) and the underlying assumptions in the Group's impairment model.

If there is any indication of impairment, value in use is estimated and compared with the carrying amount. The calculation of value in use is based on the discounted cash flow method using estimates of future cash flows from the continuing use. The key parameters are the expected revenue streams and the rate used to discount the cash flows.

Intangible assets other than goodwill are measured at cost less accumulated amortization and impairment losses. Goodwill and IT development projects in progress are not subject to amortization.

Costs associated with large IT projects for the development of software for internal use are capitalized if they are incurred with a view to developing new and improved systems.

Amortization is based on the straight-line method over the expected useful lives of the finite-lived assets, as follows:

Goodwill is tested for impairment annually or whenever there is an indication that the asset may be impaired.

Interest of DKK 29 million (2017: DKK 10 million) has been capitalized under Additions during the year above and included as Investing activities in the statement of cash flows. Capitalization rate: 2.98% (2017: 2.05%).

Land and buildings with a carrying amount of DKK 355 million (2017: DKK 377 million) have been pledged as security to credit institutions. The mortgage loan expires in 2029.

In 2018, an impairment loss of DKK 18 million on a building was recognized and included in Sales and distribution costs (2017: no impairment losses).

Property, plant and equipment is measured at cost less accumulated depreciation and impairment losses. Borrowing costs in respect of construction of major assets are capitalized.

Depreciation is based on the straight-line method over the expected useful lives of the assets, as follows:

The assets’ residual value and useful life are reviewed on an annual basis, and adjusted if necessary at each reporting date.

Dismantling and restoration relates to estimated future costs of environmental restoration – Novozymes aims for its production sites to have no negative environmental impact – and restoration of leased premises when terminating the lease and vacating the premises. These liabilities relate to established circumstances, and the costs are expected to be incurred either when concrete measures are implemented or when the sites are vacated. The expected costs and timing are by nature uncertain.

Amounts with regard to restoration of leased premises are considered uncertain, as the final settlements will depend on thorough inspection of the premises and negotiations with the lessor at the time of vacating. The costs are expected to be incurred in a minimum of 1 year to a maximum of 15 years.

Legal and other obligations

Novozymes is involved in a number of ongoing legal disputes, and provision is made for the estimated costs of these based on the current evaluation of the outcomes. The cases are expected to be finalized in 2019-2020. In Management's opinion, the outcome of these cases is not expected to give rise to any significant loss beyond the amounts provided for at December 31, 2018.

Provisions are recognized where a legal or constructive obligation has been incurred as a result of past events and it is probable it will lead to an outflow of financial resources. Provisions are measured at the present value of the expected expenditure required to settle the obligation.

No provisions are discounted, as discounting does not have any significant impact on the carrying amounts.